For the past four years i’ve been lucky enough to audition for the College World Series and land a coveted solo spot performing the National Anthem at one of their games. This year, however, was the first year that I was announced as being from “Berkeley” as opposed to my hometown of Omaha . It’s bittersweet.

THE STAGES OF STAGE FRIGHT

In order to get ready for big performances such as these I like to have what I call “Stress rehearsals“. This is when you perform the piece in a stressful situation before the big day in order to see how your stress response will manifest in your fingers. Ideally you have practiced a piece enough to have everything be “Muscle memory”, but even so your body under stress is a whole different game. When you perform solo (no backing track & nowhere to hide) for crowds of 1,000s and 1,000s of people, this is super important to keep in mind. Your body may just Judas-out on you when you need it most.

I’ve almost never had a problem with stage fright, but when I do I have trained myself to quickly go through a loop of 3 mental stages:

Yes, it’s very Italian of me to channel my rage in this way. Next time you have stage fright you should think about what sort of defensive mental loop you can use to get over it and train yourself to always go through that loop when you get scared. Getting scared is a natural human reaction, but humans also have minds, and your mind can overcome it with practice. Some performers use a heart steadying medication, but in most cases I think a strong mental loop can do the job organically. Get all of the dumb stress out of the performance and have fun with it. Learn to enjoy the high!

This time around I had two planned “Stress rehearsals”.

The first one was probably the most stressful one: Performing for the people I know and love at my work. Somehow it wasn’t difficult at all to convince the entire workplace to stop working after lunch for an extra 30 minutes in order to watch me play the anthem. I don’t have problems performing solo for stadiums of people, but when it’s in small groups sometimes it’s terrifying because you can see their reactions close up. Additionally, this was the first time that people at work saw me perform violin (outside of on the internet), so I was really hoping that I wasn’t going to ruin their expectations.

It went quite well, and then I was off to the airport.

The second stress rehearsal was me performing the anthem on the Radio the morning of the game. I got to perform for Pat & JT on Q 98.5!! For real, they are my favorite radio DJs ever. I had never been star struck until I met them at one of my Omaha Fashion Week performances about a year ago. Tears and the whole works. I used to listen to them every day on their morning show en route to work. They would always cheer me up (even if I was going to have a bad day at work), and I love them. I was super bummed when I moved to California, but then the most amazing thing happened : THEY HAVE AN APP, NOW!!! ( :
The Radio performance went well, we chatted about my music and synesthesia, we hugged, and then I was off to the game! 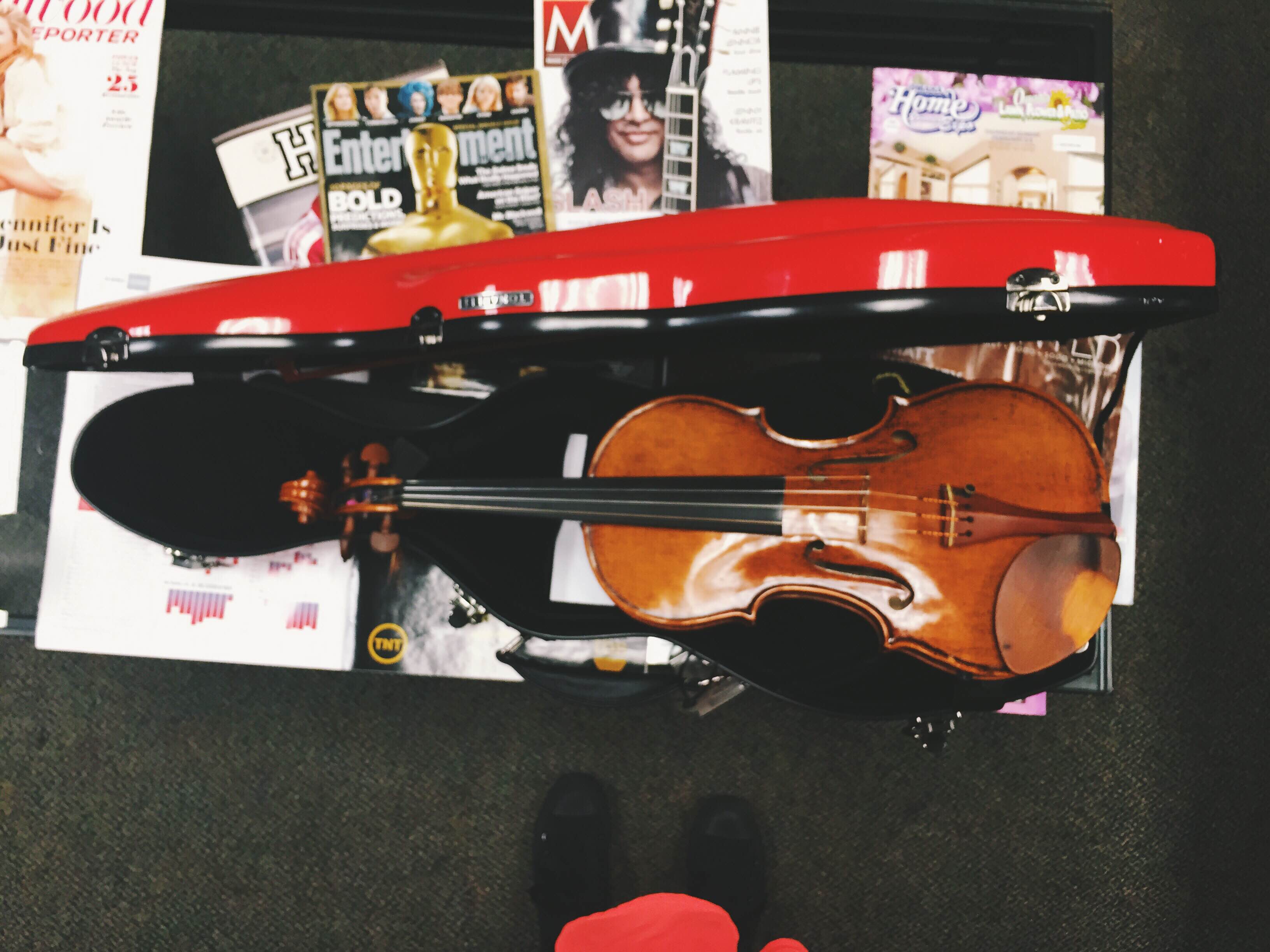 In addition from getting the piece under your fingers and kicking out all of the stress of the performance, there is another question: WHAT AREA YOU GOING TO WEAR? Being that I am a tiny lady and that I love dressing up for special occasions my first thought is to wear a dress. Sounds great and usually does the job. However, something that I learned the hard way is that there is a little thing called wind, and if your dress isn’t weighed down…you will absolutely “Marilyn Monroe on a subway vent” if you aren’t careful. The wind is like that guy that randomly “cracks” in the office that everyone saw coming, but never thought he’d actually go crazy on everyone. Always be two steps ahead of any issue that could alter your performance.

The wind is not a big problem for singers because you have hands that you can push things down with, but if you play violin your hands are too occupied to be of any help. In past years I have had to duct tape my dress to me, but this year I finally found a solution: QUARTERS! Yes, duct tape or sew quarters into the inside of your dress, and the average wind has almost no hope of getting the best of you: 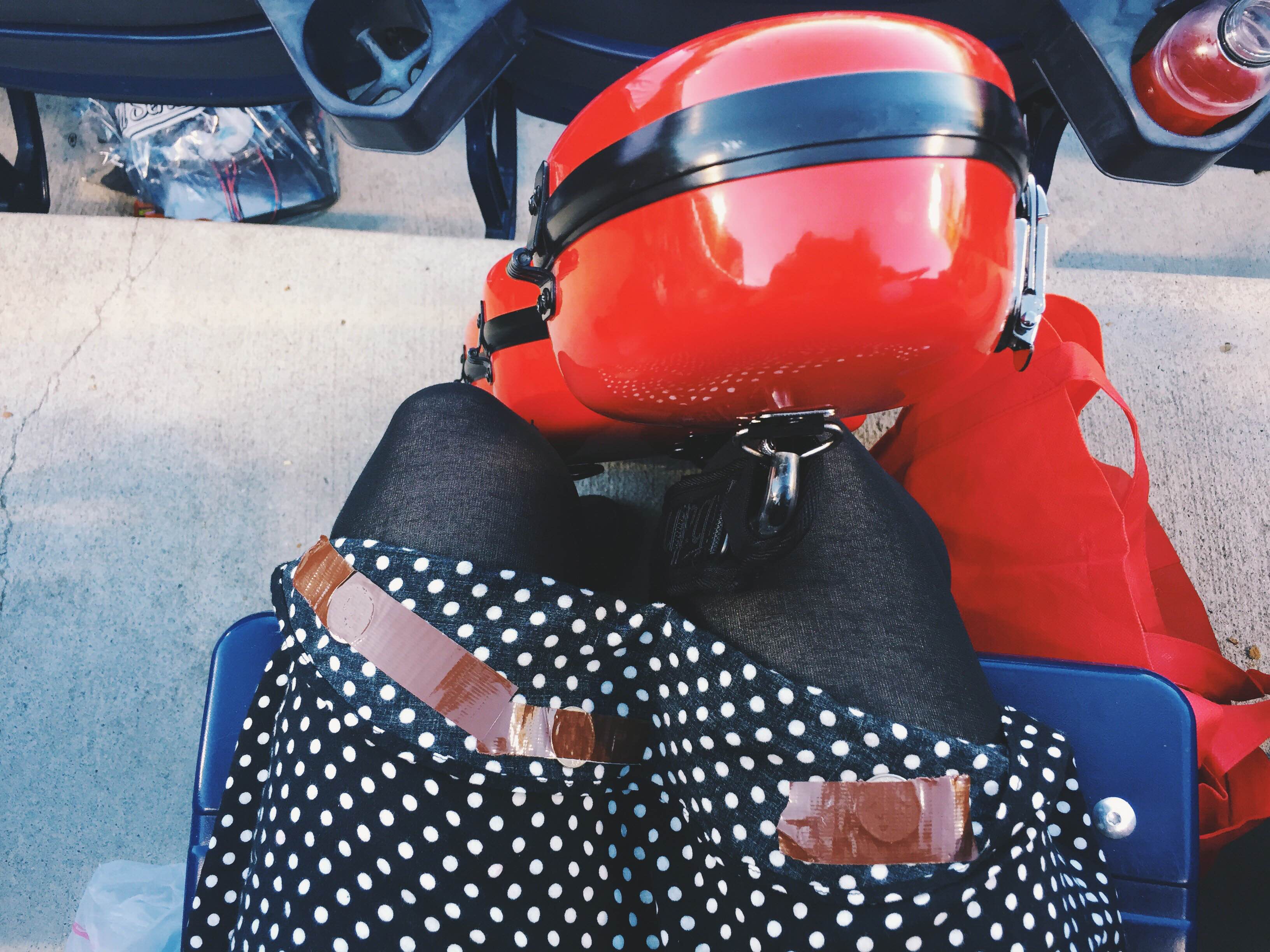 The last thing I want to worry about during a performance is wardrobe, and I’ve found my “forever solution”. Also great laundry money afterwards.

Additionally, never ever wear heels on the field. You’ll sink into the ground. Learned that the hard way as well.

My dad was my +1 backstage (my husband couldn’t make it), and I was glad to have him there. Fathers day was the following Sunday, and being that I was a little stressed I wanted to have my dad there.

Then he got hungry and left to get food.

So then there I was.
Backstage.
Stressing.
Alone in the world.

I suppose that 26 is a good (possibly overdue) age to grow up and not need your parents for support, but i’m pretty sure i’ll always be 10 when they are involved.

I hung out with the great color guard backstage until it was time to rock. As soon as I got out to the field I saw him: my well fed, happy dad. All was well. What a turkey.